He is the first and only African American 4-star General from the State of Virginia and Virginia State University. Additionally, he is the only African American to become the Commander of the United States Army Material Command, a command with over 120,000 military and civilian employees in 38 countries and 41 states with an annual budget of $50 Billion.

The Junior ROTC scholarship named in General Via’s honor for “ACHIEVEMENT” and to encourage Junior ROTC students to strive for excellent and achieve their ultimate goal of obtaining a commission in the United States Military. 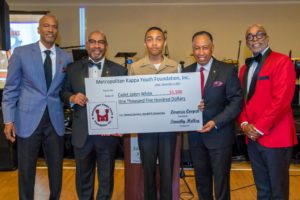 Junior ROTC Cadet White has excelled in every aspect of his JROTC education according to his professors of military science. Cadet White is a junior in high school with plans to pursue a career in the military upon high school and college graduation.